Since it has started off one heck of a HOT summer, I thought you might enjoy a post of what is going on with our family...

Our son Samuel,  has always been an outdoorsy water lovin' guy and he has stepped up to a big exciting business adventure. You might have seen his new sign in the
downtown Little Rock River Market offering
kayak tours and bike rentals for the Arkansas River Trail.
Right...that is our son Samuel! 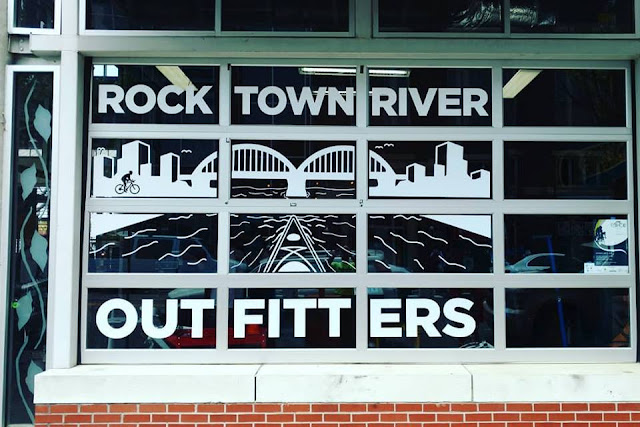 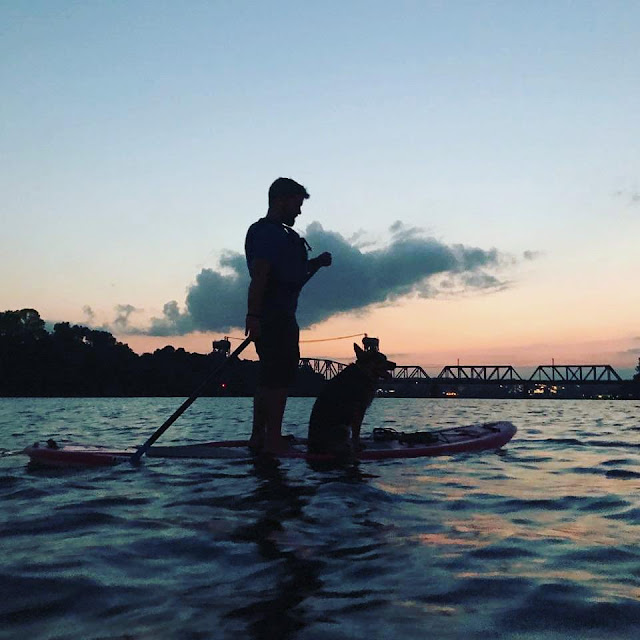 “ I grew up in Little Rock traveling to the Ozarks, canoeing and kayaking with my parents and friends. I immediately fell in love with the water and later decided to move to Colorado in 2011. I excelled as a guide for a commercial white water rafting company, specifically on class III and IV rapids on the Arkansas River in Browns Canyon. That year I realized there is so much more to the Arkansas River than only being a beautiful view from the bank. I was drawn back to Little Rock and found myself surrounded by a thriving city, working and living the city life, all the while still magnetically pulled to the river. Against my mothers wishes I embarked on my mission, kayaking and exploring farther into the Arkansas river. After years of exploring the beauty and adventure of the Arkansas, I realized I could not selfishly enjoy this all for my own and decided to start Rock Town River Outfitters, so that everyone can experience the awe and excitement I feel whilst paddling on the Arkansas River. My goal is for the Arkansas River to not be something that people fear, but rather a river that they respect and enjoy.” _ Samuel Ellis 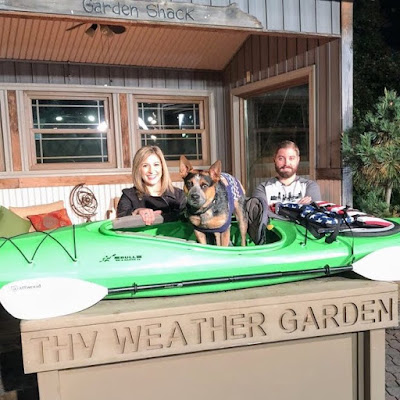 You might have seen Samuel  interviewed on KTHV with his canine sidekick Grizz Lee Bear.
Grizz Lee Bear joined the RTRO team in 2016. He is an expert SUP boarder and takes his security duties seriously by performing regular perimeter checks while at the marina. Most days, you can find Grizz riding on the front of Samuel's boat, rounding up stray kayaks, or lounging on the dock. He is an energetic Leo with a heart of gold, a love for smelly socks, and will gladly accept generous tips in the form of Milk-Bones. 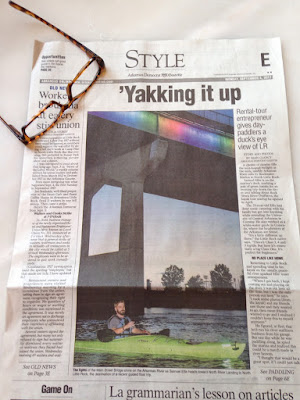 You might have read about his tour and rental business,
Rock Town River Outfitters in the paper.... 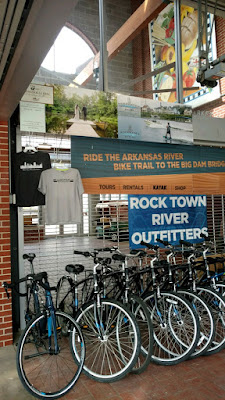 It doesn't have to be Vegas...

We have a full season of weddings coming up and  now can offer ideas for a perfect Bachelor /Hen Party for a group of friends. Sports are a great way to get your closest friends together and honor the bride or groom. 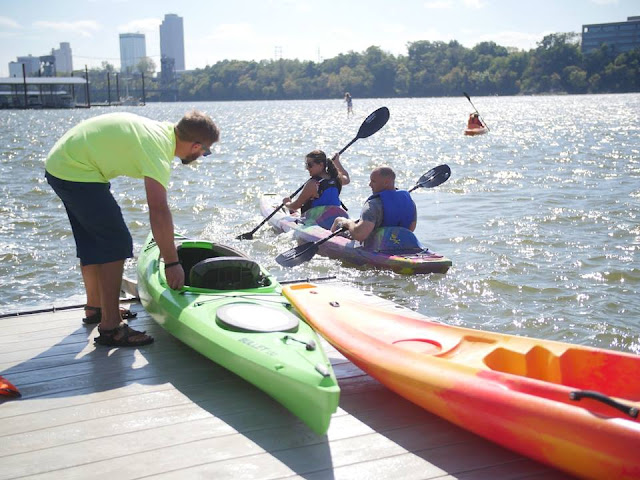 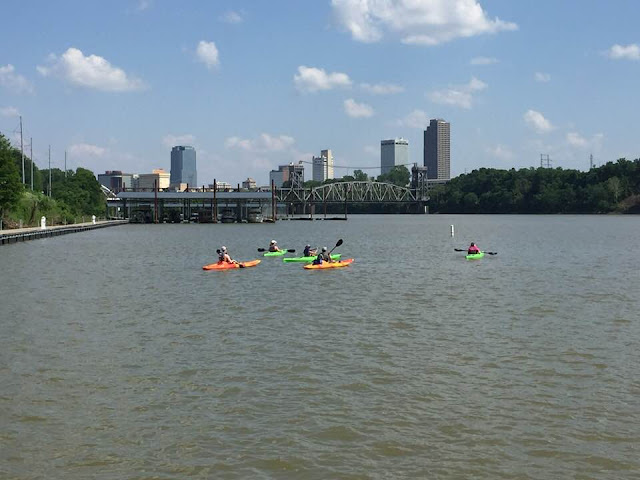 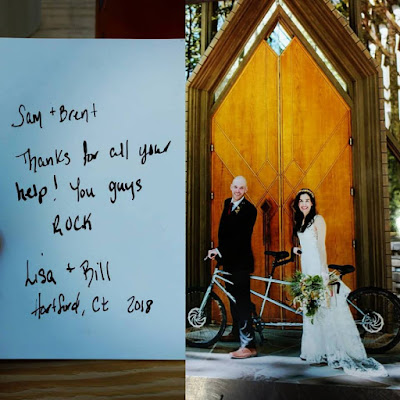 Samuel received a thank you note for a bike rental for  their "traditional" church wedding. 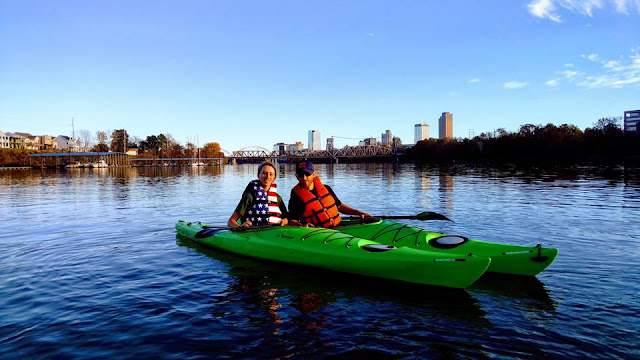 If the  groom-to-be is a fan of the outdoors, consider a weekend Kayak Tour 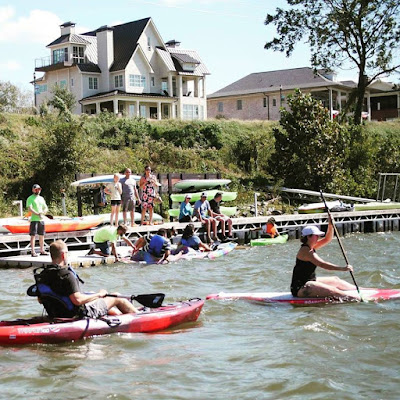 Take off point is the Rockwater Marina on the north shore of the river. 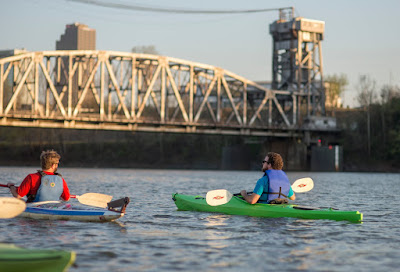 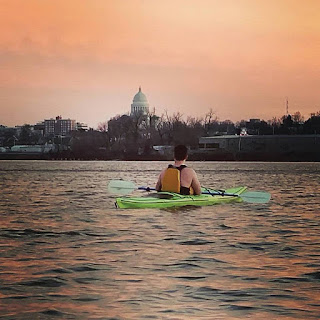 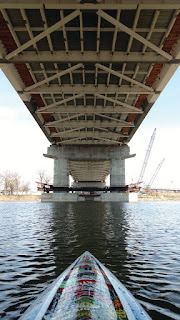 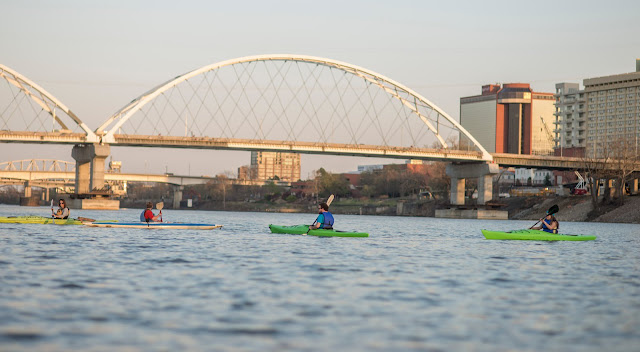 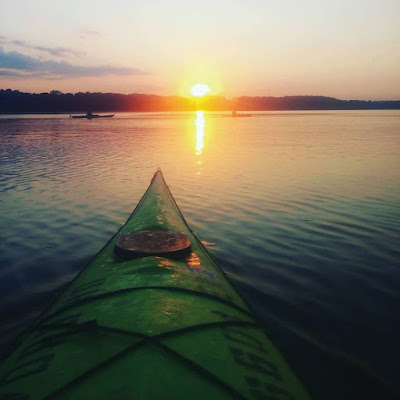 Night time is especially exciting with all of the downtown bridges lighting the night sky.

If the bells are about to be ringing
and you are looking for an adventurous and fun way
to celebrate your last pre-wedding party
check out Rock Town River Outfitters !
(be sure and tell Samuel, his mama sent you)

www.rocktownriveroutfitters.com
Rock Town River Outfitters offers kayak and bicycle rentals as well as guided tours of Little Rock Arkansas. Hop on a bike and explore 15 miles of River Trail or Paddle through the city on the Arkansas River. 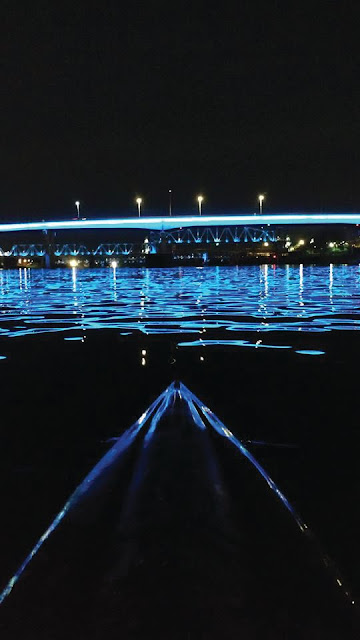 Posted by Alda's Magnolia Hill at 11:34 PM No comments: